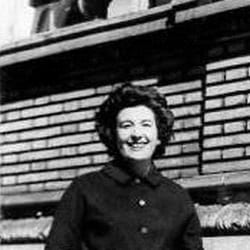 Artist Miriam Schapiro is best known for her groundbreaking work in feminist and decorative arts.   Ms. Schapiro was born in Toronto, Canada, and attended drawing classes at the Museum of Modern Art as a teenager.  She received her B.A., M.A., and M.F.A. from Iowa State University in Iowa City.   While studying printmaking there, Ms. Schapiro met her husband, abstract painter Paul Brach.  She traveled to New York and then to California, painting and teaching art at a number of colleges.  Ms. Schapiro has served on the faculty

of several institutions, including Bryn Mawr College in Bryn Mawr, Pennsylvania, Amherst College in Amherst, Massachusetts, the University of California in San Diego, and the California Institute of the Arts in Valencia.

Ms. Schapiro’s impressive career spans several decades. In her early career in the 1950s and 1960s, she primarily painted abstract works and geometric, hard-edged pieces, as well as early digital works using a computer; later, she was an artistic pioneer in both feminist and craft-based art movements.   As co-director of the Feminist Art Program with Judy Chicago at the California School of the Arts in the 1970s, Ms. Schapiro collaborated with

Ms. Chicago and her students on the seminal work Womanhouse.   The installation, which occupied seventeen rooms in an abandoned Hollywood mansion, examined domestic spaces and female roles within the home and society at large in a notably innovative and provocative manner.  The ambitious project, which encompassed happenings, performance art, painting, costume, installation, and fiber arts in a single total

environment, attracted large audiences and vast press coverage during its

month-long opening to the public in January and February of 1972.

cloth, and quilting materials evoking the craft-based domestic arts practiced by women for centuries.  She is a founding member of the Pattern and Decoration Movement of the 1970s, made up of artists using ornamental materials and styles, often originating from realms of the domestic and the traditionally feminine.  Her later work includes paintings

and collages considering specific moments in women’s lives, as well as her own relationships with other female artists, such as Frida Kahlo and Varvara Stepanova.

Ms. Schapiro’s pieces have been featured in exhibitions at the Museum of Fine Arts in Boston, the Museum of Modern Art, the Jewish Museum, and the Steinbaum Krauss

Gallery in New York.   Her work is included in the collections of the National Gallery of Art and the National Museum of Women in the Arts in Washington, D.C., the Museum of Fine Arts in Boston, and the Museum of Modern Art in New York.   Ms. Schapiro received a Guggenheim Fellowship to continue creating works on dance and theater.  Her honors also include the Skowhegan Award, the Woman’s Caucus for Art honors award, a Distinguished Artist Award for Lifetime Achievement from the College Art Association, and four honorary doctoral degrees.  She is also the recipient of fellowships from the Rockefeller Foundation

and the National Endowment for the Arts.

For more information on Womanhouse: