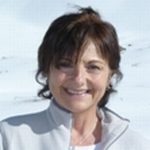 As Assistant Professor in the Facultad de Humanidades de la Universidad Nacional de Rosario (UNR), Mónica Bernabé has specialized in nineteenth- and twentieth-century Latin American Literature. Since 2005, when she received her Ph.D. from the Universidad de Buenos Aires (UBA), she has been a guest professor at this university as well as the Université Lumiére Lyon 2 in France and the Pontificia Universidade Católica do Rio de Janeiro (PUC) in Brazil.

In Vidas de artista. Bohemia y dandismo en Mariátegui, Valdelomar y Eguren (Artists Lives. Bohemia and Dandyism in Mariátegui, Valdelomar and Eguren), published in Rosario, 2006, by Beatriz Viterbo and Instituto de Estudios Peruanos, Ms. Bernabé approached the peculiarities of peripheral intellectual fields and discussed the automatic transference of notions conceived in central modernities to analyze modernity in neocolonial countries. In recent years, she has written essays focusing on the analysis of contemporary urban narratives in relation to the cultural changes that took place in the late twentieth century, particularly the configuration of an urban territorial imaginary highly impacted by economic and political crises in Argentina during the last thirty years and the effects of global transformations such as the technology revolution and migration waves. Her research on these topics led to the promotion in 2009 of a postgraduate program in Cultural Studies at the Centro de Estudios Interdisciplinarios / Universidad Nacional de Rosario.

Ms. Bernabé is currently in charge of group research projects involving how culture functions in the peripheral areas of the city of Rosario, as well as the organization of an archive of vanguard art experiences during the late twentieth century and early twenty-first century in Latin America. The Guggenheim Fellowship she was recently awarded will allow her to further her research in the area of thought that operates in the crossing between cultural criticism and literature from an interdisciplinary perspective that will lead to a better understanding of the cultural complexity of Latin America and Argentina.