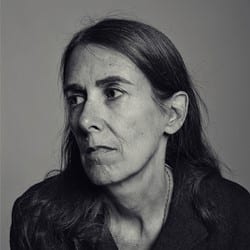 Moyra Davey is an artist based in New York, and whose work comprises the fields of film, photography, and writing. She has produced several works with the moving image, most recently i confess (2019), which will have its American premiere at the Museum of Modern Art in 2020. She is the author of numerous publications including Burn the Diaries and The Problem of Reading, and is the editor of Mother Reader: Essential Writings on Motherhood. A collection of her writings, published by New Directions Press, is forthcoming in Spring 2020. Davey has been the subject of major solo exhibitions at institutions including Portikus, Frankfurt/Main (2017); Bergen Kunsthall, Norway (2016); Camden Arts Centre, London (2014); Kunsthalle Basel (2010); and Fogg Art Museum at Harvard University, Cambridge, MA (2008). Her work is found in major public collections, including the Museum of Modern Art and the Metropolitan Museum of Art in New York, and Tate Modern in London. Photo Credit: Gene Pittman