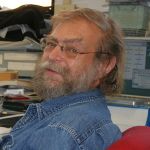 Nadrian C. Seeman was born in Chicago in 1945. Following a B.S. in biochemistry from the University of Chicago, he received his Ph.D. in biological crystallography from the University of Pittsburgh in 1970. His postdoctoral training, at Columbia and MIT, emphasized nucleic acid crystallography. He obtained his first independent position at SUNY/Albany, where his frustrations with the macromolecular crystallization experiment led him to the campus pub one day in the fall of 1980. There, he realized that the similarity between 6-arm DNA branched junctions and the flying fish in the periodic array of Escher's 'Depth' might lead to a rational approach to the organization of matter on the nanometer scale, particularly crystallization. This notion led to his founding of the field now known as structural DNA nanotechnology. This field, now pursued by about 60 laboratories worldwide, includes as its spin-offs single-stranded DNA topology, nanorobotics and the organization of nanoelectronics. He has worked at New York University since 1988. The early successes of his laboratory included the assembly of polyhedral catenanes, such as a cube and a truncated octahedron. (image 1 of the slide show) and Borromean Rings (image 2). His recent work includes the crystal structure of the first self-assembled 3D DNA crystal (image 3) and the construction of a nano-scale assembly line (image 4). He has published over 250 papers, and has won the Sidhu Award, the Feynman Prize, the Emerging Technologies Award, the Tulip Award in DNA Computing, the World Technology Network Award in Biotechnology, the NYACS Nichols Medal, the SCC Frontiers of Science Award, and MIT's Alexander Rich Medal. More extensive information on the figures is available at http://seemanlab4.chem.nyu.edu.