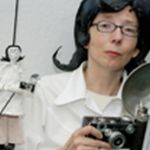 Nancy Andrews, a Fellow in filmmaking and faculty member at the College of the Atlantic in Bar Harbor, Maine, has been making unique films for over twenty years.  After receiving a B.F.A from the Maryland Institute, College of Art, she joined Emma Elizabeth Downing and Michael Willis to form the performance group Lambs Eat Ivy, which presented such works as the mythical rock opera Ghost Girl (1991).  While earning an M.F.A from the School of the Art Institute of Chicago, she began melding her interest in film and performance, which became a hallmark of her work. For example, Hedwig Page, Seaside Librarian (1998), which won the Juror's Choice Award at the 20th Annual Black Maria Film Festival, among other honors, combines film and live performance, and live sound performance is an integral part of her "silent" films, such as The Reach of an Arm (2000), which premiered at the Outer Ear Festival in Chicago; both The Dreamless Sleep (2004) and Monkeys and Lumps (2003) make use of puppets and animation created by Ms. Andrews.

In the film she is making during her Fellowship term, tentatively titled "On a Phantom Limb," Ms. Andrews intends to explore the postmodern condition through the metaphor of a bird-woman cyborg, tipping her hat to the influences of Edgar Allen Poe's canon, Goethe's Faust, and other nineteenth-century literary explorations of the relationship between nature and science.

Ms. Andrew's films are in the collections of the Museum of Modern Art in New York City, the Bibliothèque Nationale in Paris, and the Flaxman Film Collection of the School of the Art Institute of Chicago.  Among other honors, she served as a juror at the Ann Arbor Film Festival in 2003.