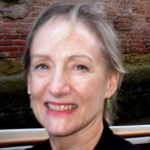 Nancy Davidson is an interdisciplinary artist, working primarily in sculpture and installation. Davidson grew up in Chicago and received a B.F.A. from the University of Illinois at Chicago. She received her M.F.A. from the School of the Art Institute of Chicago in 1975 where she began her professional career, exhibiting in solo and group shows in 1977 and 1978, including at the Museum of Contemporary Art, Chicago, Art Institute of Chicago, and Walker Art Center. In 1979 Davidson relocated to New York.

During the mid-to-late eighties, she began a series of sculptural investigations into the feminized body as theater. As the artist later recalled, “I was still interested in minimal forms, but I began to sense a need for more communication with the viewer.” After 1992 Davidson refocused her work with sculpture, installation, and photography, using inflated weather balloons to challenge the notions of contemporary monumental sculpture while simultaneously repurposing comedic tropes of bodily mass, fleshiness, and beauty. In 1999–2000 The Institute of Contemporary Art, Philadelphia, exhibited Davidson’s installations and sculptures in the exhibition Breathless. The artist’s first video, named Breathless, was made as part of the immersive media for this show.

Davidson continued to exhibit widely including the Contemporary Arts Center in Cincinnati in 2001 and the Robert Miller Gallery in New York in 2001. Her opening night fell on 9/11. Several years later this event triggered a new body of work.

Davidson witnessed the destruction of her neighborhood, watching the World Trade Center towers falling from her studio window. Intuitively she began thinking about her past and personal mythology. As a child in the 1950s, Davidson was inspired by the cowgirl character and her can-do spirit.  What began as a childhood attraction to this archetypal American figure became an irreverent reinvention, celebrating and critiquing popular culture, comic humor, and our society’s fascination with the overblown and oversized. Over the next seven years Davidson produced a body of work including sculpture installations, photos, videos, and collages that focused on Western themes embedded in popular culture.

Creative Capital funded Davidson’s Cowgirl research and project. The result, Dustup, was exhibited at the Betty Cuningham Gallery, New York, in the fall of 2012 and an expanded version was exhibited at the Boca Museum of Art in Boca Raton, Florida, in 2013. Davidson is currently working on a book project entitled Cowgirl: Nancy Davidson to be distributed by DAP Publishers.