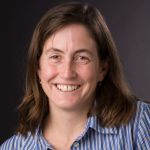 Natalie Mahowald is an Associate Professor of Atmospheric Sciences at Cornell University in the Department of Earth and Atmospheric Sciences.  She earned her undergraduate degrees in Physics and German at Washington University in St. Louis in 1988, her M.S. in Natural Resource Policy at the University of Michigan, and her Ph.D. in Meteorology at MIT in 1996.  She also worked in air-pollution consulting and studied in Germany before her Ph.D. She did her postdoctoral work at Stockholm University, before moving to a faculty position at University of California, Santa Barbara.  She then moved to the National Center of Atmospheric Research before starting as a faculty member at Cornell in 2007.

The focus of Natalie’s work is on natural feedbacks in the climate system, and how they responded in the past to natural climate forcings, and how they are likely to respond in the future.  Much of her work focused on mineral aerosols, which are an excellent example of an earth system process: they both respond to climate, as well as force climate to change.  She has also worked on fire, the carbon cycle, and more recently on understanding natural emissions of methane and nitrous oxide.

One of the strands that pulls her work together is the interaction of different components of the earth system, and how they modify climate.  An example is her recent paper identifying aerosol-carbon cycle (biogeochemistry) interactions as a significant climate forcing.  Human activities emit both green house gases such as carbon dioxide or methane, as well as aerosols (small particles that cause haze) and other gases that are bad for human health and impact air quality.  It has been known for a few decades that anthropogenic aerosols cool the climate, and partially offset the warming caused by emissions of greenhouse gases.  In this recent Science paper, Natalie pointed out that the impact of anthropogenic aerosols onto the carbon cycle reduced carbon dioxide concentrations by up to 50ppm (carbon dioxide has increased 100ppm over the last 100 years), and through that mechanism also offset the emissions of carbon dioxide.  Because aerosols cause poor air quality, they can make people sick or even cause early death, and as countries get wealthier they will hopefully reduce emissions of aerosols. Unfortunately, this will make the solution to climate change harder, as more carbon dioxide will remain in the atmosphere.  Improving our understanding of the interactions between aerosols and the carbon cycle is the focus of Natalie’s Guggenheim Fellowship.