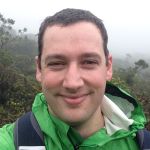 Nathan Swenson is a tropical-plant field biologist by training with a research focus on using phylogenetic and functional information to understand the distribution and dynamics of biodiversity through space and time. He received his Ph.D. in ecology and evolutionary biology in 2008 at the University of Arizona and was a U.S. National Science Foundation postdoctoral fellow in bioinformatics with the Center for Tropical Forest Science then located at the Arnold Arboretum, Harvard University. His career over the past decade has coincided with the boom in phylogenetic- and functional trait-based analyses of ecological datasets. In recognition of his work integrating phylogenetic and functional trait information across scales, he received the 2011 Jasper Loftus-Hills Young Investigator’s Award from the American Society of Naturalists and the 2012 Ebbe Nielsen Prize from the Global Biodiversity Information Facility. During his tenure as a Guggenheim Fellow, Nathan Swenson will develop phylogenomic and functional trait datasets for adaptively radiating woody plant genera in New Zealand with the purpose of linking the evolutionary history of trait diversification to present-day geographic distributions and species co-occurrence.