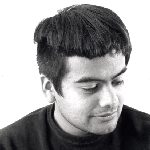 Naufús Ramirez-Figueroa is an artist whose installation, video, and performance work delves into folklorism, sexuality, magical practices, the welfare of children in war, the experiences of refugees, and poetry. He received a B.F.A. from Emily Carr University in 2006 and an M.F.A. from The School of The Art Institute of Chicago in 2008. Naufús  has participated in numerous solo and group exhibitions in Europe, North America, Latin America and the Middle East. Recent projects  have been presented at Casa America (Madrid), Akademie Schloss Solitude (Stuttgart), Des Pacio (Costa Rica), The Hangar (Beirut), and The Paiz Biennial (Guatemala City). Among the numerous honors he has received is the Fund For Performance Art from the Franklin Furnace in 2007. He lives between Vancouver, Canada, and Guatemala City, Guatemala.