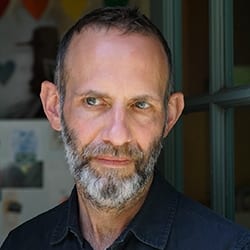 Nicholas Muellner is an artist who operates at the intersection of photography and writing. Through books, exhibitions and slide lectures, his projects investigate the limits of photography as a documentary pursuit and as an interface to socio-political and personal narratives. Often focused on a queer experience of the post-Soviet world, his work transforms descriptive accounts into literary dramas, autobiographical reflections, and philosophical inquiries. Muellner’s five published books include The Photograph Commands Indifference (A-Jump Books, 2009), The Amnesia Pavilions (A-Jump Books, 2011) and In Most Tides, An Island (SPBH Editions, 2017), which was shortlisted for the Aperture/Paris Photo Photobook of the Year Award. In addition to solo exhibitions in the U.S., the U.K. and Russia, his writings on photography have been published by MACK, Aperture, Afterimage, Triple Canopy, Art Journal and Routledge. Muellner has performed slide lectures at numerous venues in the U.S. and Europe, including MoMA P.S.1, the Carnegie Museum of Art, The Photographers Gallery (London), the National Center for Contemporary Art (Saint Petersburg) and the Museum of Contemporary Photography (Chicago). Muellner’s work has been supported by the John Gutmann Fellowship, residencies at the MacDowell and Yaddo Colonies, the Russian National Center of Contemporary Art, and the Carnegie Museum of Art, as well as grants from the Trust for Mutual Understanding and CEC Artslink. He received a BA in comparative literature from Yale University and an MFA in Photography from Tyler School of Art, Temple University. Muellner is Associate Professor and Co-Director of the Image Text MFA and Press at Ithaca College.