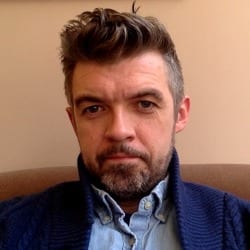 Nick Laird is a poet, novelist, lawyer, screenwriter and literary critic. He was born in County Tyrone in 1975. and educated at Cambridge, Harvard, and the College of Law, London. For many years he worked in London and Warsaw as a litigator. He's the recipient of many awards for his fiction and poetry including the Betty Trask prize, the Geoffrey Faber Memorial Prize, a Somerset Maugham award, the Rooney Prize and the Ireland Chair of Poetry Prize. The New Yorker said of his latest collection, Go Giants, that it “celebrates the jagged coexistence of the glorious and the mundane, the classical and the contemporary, the whimsical and the deadly serious”, and “the range of these scrupulous poems suggests there is little in form or content that Laird cannot master.” He is a Fellow of the Royal Society of Literature. An anthology of poems, The Zoo of the New, co-edited with Don Paterson, is forthcoming from Penguin in September.