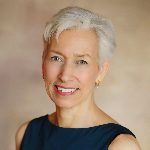 Nina G. Jablonski is Distinguished Professor of Anthropology at The Pennsylvania State University.  She is a biological anthropologist and paleobiologist who conducts research on the evolution of adaptations to the environment in humans and their close primate relatives.  Jablonski is especially fascinated by problems of evolution that do not have immediate answers in the fossil record.  She enjoys pursuing studies of the “unseen” aspects of human evolution and has spent much of the last twenty years studying the evolution of human skin and skin color.  Much of this work has been done in collaboration with her husband, George Chaplin.  Skin pigmentation is a product of evolution, and profoundly affects human health and social well-being.  Jablonski’s research has opened new and important avenues of investigation on what was a long-neglected topic.  In their 2000 paper on the evolution of human skin coloration, Jablonski and Chaplin combined data on human skin reflectance, remotely sensed data on ultraviolet radiation (UVR), and multiple lines of evidence on the physiological reactions of skin to UVR to describe the probable course of the evolution of human skin pigmentation in the human lineage.  Their study was the first to illuminate the probable evolutionary reasons for dark pigmentation in early members of the human lineage, for light pigmentation in lineages that dispersed outside of the tropics, and for maintenance of a continuous latitudinal gradient of skin color under natural selection.  The paper was written prior to the publication of the human genome and of studies of the pigmentation genome, and its conclusions have subsequently been supported by genomic studies.  Jablonski’s research program has since ramified to include further detailed studies of the mechanisms whereby natural selection brought about changes in skin pigmentation, and how cultural evolution has contributed to successful adaptive compromises for people inhabiting the extremes of UVR conditions on earth.  She has also translated her interests in the history of skin-color based race classifications and racism into a new book, Living Color:  The Biological and Social Meaning of Skin Color, which will be published by University of California Press in late 2012.  The importance of Jablonski’s research on the evolution of skin pigmentation was recognized in 2005 by Fletcher Philanthropy when she was awarded one of the first twelve Alphonse Fletcher, Sr. Fellowships, and in 2010 when she was awarded an honorary doctorate by the University of Stellenbosch in South Africa.  Her previous book, Skin: A Natural History (University of California Press, 2006), was awarded the W.W. Howells Book Award of the American Anthropological Association in 2007.

Jablonski also conducts research on primate evolution, especially of Old World higher primates, by studying the fossil record.  Her research combines field paleontology with detailed study of fossils in the laboratory, and theoretical work aimed at understanding why some animals survive under changing environmental conditions and others don’t.  Her fieldwork and laboratory studies in paleontology have involved long-term collaborations with scientists in east and south Asia, and in eastern Africa.  She conducts regular paleontological fieldwork, most often in Yunnan Province in southwestern China.

Jablonski is an elected member of the American Philosophical Society, and an elected Fellow of the American Association for the Advancement of Science, the California Academy of Sciences, and the Society of Biology (U.K.).  She is a member of the Advisory Council for the Social, Behavioral, and Economic Sciences of the National Science Foundation, a member of the Board on Behavioral, Cognitive, and Sensory Sciences of the National Research Council, a Joint Editor of the Cambridge Series in Biological and Evolutionary Anthropology, and an Associate Editor of Folia Primatologica.

During the tenure of her Guggenheim Fellowship, Jablonski will begin a collaborative, longitudinal study of vitamin D production in people of different skin colors under natural UVR conditions.  This project will be conducted in South Africa, a country with seasonally variable UVR conditions and inhabitants of a wide range of skin tones.  Jablonski’s study will be one of the first to try to quantify the rate at which people make vitamin D in their skin under natural, rather than laboratory, conditions.  The goal of this research will be to redress the serious lack of basic scientific information on the determinants of vitamin D production in people under field conditions, and possibly pave the way for simple public health interventions that may prevent vitamin D deficiency.

American Academy of Arts and Sciences, 2015