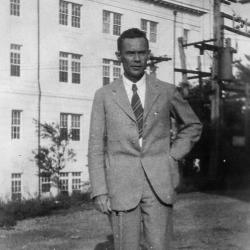 WULF, OLIVER REYNOLDS:  Appointed for (1) an experimental and theoretical study of the relation between the structure of the electronic states of the nitrogen molecule and the ability of this molecule to interact with other simple molecular species such as oxygen and hydrogen atoms; (2) a spectrographic study of a possible source of the green auroral line of oxygen in the light of the night sky; in certain European laboratories; tenure, twelve months from September 15, 1932.