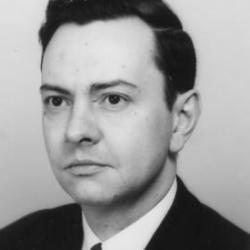 Oliver Watkins Ferguson was born in Nashville, Tennessee, in 1924. In 1943, after two years at Vanderbilt University, he joined the U.S. Army, serving with the 44th Infantry Division in the European Theater of Operations in 1944-45. Following his discharge, he resumed his studies at Vanderbilt, earning the B.A. and M.A. degrees in English literature. He was an instructor at the University of Arkansas in 1948-50, then enrolled as a Ph.D. candidate at the University of Illinois. He received the doctorate in 1954.

He taught at the Ohio State University before joining the English faculty at Duke University in 1957. He was department chairman from 1967 to 1973, and retired from the university in 1993. During his years at Duke, he was first associate editor, then editor, of the South Atlantic Quarterly.

In addition to serving on the boards of various professional organizations, he was a lecturer at the National Humanities Center Institute in Research Park, North Carolina. Among his awards and honors are a Rotary International Fellowship and a Huntington Library Summer Fellowship. He is listed in Who’s Who in America.

His publications include Jonathan Swift and Ireland and numerous articles and reviews, chiefly on eighteenth-century English literature. He was bibliographer for the entry on Jonathan Swift in The New Cambridge Bibliography of English Literature (1971).