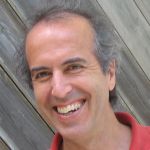 New York-based filmmaker Oren Rudavsky will be working on a number of projects during his Guggenheim Fellowship term: currently he is producing both the third installment of Time for School for the PBS series Wide Angle, and The Zionist Idea, a film funded by the National Endowment for the Humanities (NEH).  For this year's Whitney Biennial, he produced Javier Tellez's acclaimed film Letter on the Blind. His other credits as a producer include the ITVS-funded And Baby Makes Two for PBS' series Independent Lens; and he has produced for Prime Time Live (ABC) and Media Matters (PBS). He has also worked on the film unit at Saturday Night Live, was a DP for the first season of The Real World, and a post-production supervisor for Tales from the Dark Side and Monsters. Mr. Rudavsky's credits as a director of photography are many, with The Last Klezmer, an award-winner at the Berlin International Film Festival, and Voices from the Attic among them.

The subjects of his films have ranged from mental illiness to race relations and have featured the Amish, Jews in Eastern Europe, Catholic nuns, and Hasidim.  His work, regardless of topic, has consistently been very well received.

When his first fiction feature, The Treatment, starring Chris Eigeman, Ian Holm, and Famke Janssen, premiered at the 2006 Tribeca Film Festival it won the "best film made in New York" award. On its theatrical release the following year it garnered rave reviews: Andrew Sarris described it as "the romantic sleeper of the season" in the New York Observer; New Yorker magazine applauded it in a starred review as "Superb! A real joy!"; and US Weekly recommended the "refreshing smart-alecky romantic comedy."

His 1997 film A Life Apart: Hasidism in America, which was funded by the NEH and narrated by Leonard Nimoy and Sarah Jessica Parker, won similar kudos and enjoyed a highly successful theatrical release.  It not only made the short list for an Academy Award for best documentary and received an Emmy nomination for its national PBS releases in 1998, but won first prize at the Charlotte International Film Festival.

Described by The Nation as "far too important--and too moving--for anyone with a conscious to ignore," Mr. Rudavsky's nonfiction feature film Hiding and Seeking elicited an equally enthusiastic response from critics and filmgoers alike during its wide theatrical release.  It was broadcast in 2005 as part of the PBS series POV, chosen from hundreds of entries to represent the U.S. at the 2006 Input Conference in Taiwan, and was awarded the Grand Prize at the Warsaw International Jewish Film Festival in 2004, among many other honors.

Mr. Rudavsky has taught filmmaking at Columbia University and in the City College master's degree program.