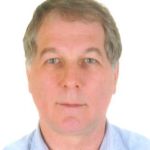 Oswaldo Baffa-Filho was born in Brazil in 1954. He received his B.Sc. in Physics (1976) at the Instituto de Física e Química de São Carlos (IFQSC) of the University of Sao Paulo (USP), where he also completed his master’s degree (1980) and doctoral degree (1984), both in applied physics (Molecular Biophysics). Since then has worked in interdisciplinary projects in the biophysics/medical physics interface; radiation dosimetry and dating by Electron Spin Resonance (ESR) have been areas of interest for him throughout his career.

In 1981, he joined the Departamento de Física e Matemática, Faculdade de Filosofia, Ciências e Letras de Ribeirão Preto (FFCLRP), Universidade de São Paulo as an assistant professor; he was promoted to professor in 1996. A postdoctoral internship (1986-1988) at the Department of Medical Physics, University of Wisconsin-Madison, with support from the John Simon Guggenheim Foundation, was influential in the establishment of a research group in biomagnetism that gained national and international recognition through the many research articles published, successful M.S. and D.Sc. projects concluded, grants obtained, and invitation for panel organizations, talks and seminars. He has maintained a long-standing collaboration with the Biomagnetism Research Laboratory at the UW-Madison Department of Medical Physics and is currently a visiting professor there.

His early career interests were mainly in the field of biophysics, researching the structural aspects of hemoproteins, but later leaned more toward medical physics, especially work in biomagnetic techniques for the study of gastrointestinal motility, electron spin resonance for dosimetry and dating, magnetic resonance imaging (MRI) for dosimetry, spectroscopy (MRS), and functional magnetic resonance imaging (fMRI), among other applications.

Oswaldo Baffa was Vice-Dean and Dean of the FFCLRP and held several other administrative positions there. He has visited several scientific institutions abroad; promoted visits at local institutions by distinguished international scientists, and participated in and organized national and international scientific events. He is a member of the Brazilian Physical Society, Brazilian Association of Medical Physics and Sao Paulo State Academy of Sciences. Currently, he is also an associate researcher at the Brazilian National Research Council (CNPq). He has published over one hundred scientific papers with several collaborators in Brazil and abroad.