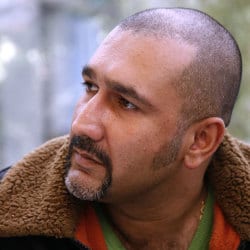 Filmmaker and author Parvez Sharma grew up in a small town in in northern India, just twenty minutes from the Islamic seminary that gave birth to the Taliban, while enrolled at a Catholic school called St. Mary’s Academy. Sanskrit was a third language and P.E. was Yoga. He excelled at neither. Adding to this unusual childhood was an early realization that he absorbed the world in images, aspect ratios and stories. By 12 he had (inappropriately) speed-read his mother’s copy of “Gone with the Wind” and even gotten his hands on Christopher Isherwood’s, “Berlin Diaries”! By 13 he was precociously photographing “everything” with a pretty basic Vivitar camera his American cousins had gifted him. His fate was sealed, a life behind the camera and also a wordsmith.

In 2006, the U.S. government, gave him, what he considers a “laughably real” visa category called “Alien with Extraordinary Abilities.” Taking it to heart (he says), he has made fearless, multiple award winning films about faith, identity, religious extremism and social justice. His evolving filmography is not only astonishing; it also includes many world firsts, encompassing four continents. The American part of this extensive filmography includes two multiple award winning films, A Jihad for Love and A Sinner in Mecca. Both films played at more than a 100 film festivals ranging from the prestigious Toronto International Film Festival, the Berlinale, IDFA (Amsterdam) and Sheffield (U.K.) The former documentary was the world’s first film on Islam and homosexuality and the story of how it was made is remarkable. An estimated eight million viewers finally saw it (and continue). Parvez built a unique “underground network of distribution,” and bootlegged copies of the film made their way into markets from Lahore to Beirut, Cairo and Tehran.

The latter film, a NYT Critics’ Pick was the world’s first film made on an iPhone set in Saudi Arabia, under threat of beheading (it is mostly set in Mecca, during the Hajj pilgrimage). The film tackles the evils of Wahhabi (Saudi) Islam and its relation to Daesh (ISIS) while offering a never before seen, gritty, street-level, insider view of the Hajj. Non-Muslims have not been allowed into Mecca for 14 centuries. Parvez coined the term, “Cinema 3.0” to describe this film.

During the past decade, Parvez and his work with Islam; cinema; (and filmmakers becoming change-agents) has been one amongst some of the most discussed documentaries in the media globally. During this decade’s worth of career (in America) he has been hailed as a “gifted filmmaker” by the Wall Street Journal, “an iconoclast” by Vice, “an extremely polite spy” by the New York Times and as “carrying out an attack on Islam” by Ayatollah Khamenei’s regime in Iran.

Following his career evolution closely since 2004, the New York Times infact has collectively said, “There is no doubting the courage and conviction of the New York documentarian Parvez Sharma…We emerge from (Sharma’s) films more enlightened… Nothing in his difficult processes -- including the threats to himself -- have destroyed Mr. Sharma's faith in the ability of Islam to tolerate diversity.”

Parvez’s work has also been featured, reviewed, harshly critiqued, trolled, and more (and not just the media), from the Washington Post, to CNN, MSNBC and Fox; from the New Yorker, Der Speigel, Le Monde and the Guardian, LA Times, Egypt’s Al-Ahram, Pakistan’s Dawn, the Times of India and much more.

Parvez has spoken at more than 200 events worldwide—from Senn High school in Chicago and the Dar-ul-Uloom Sunni seminary in north India, to Harvard and Yale, from Google HQ to the EU Parliament--about a range of subjects, including how to solve the "problem" with Islam and how to create cinema in perilous conditions. In 2012, the U.S. State Department, a few U.S. embassies in Western Europe and the Department of Homeland Security organized screenings and workshops headlined by Parvez as a keynote speaker. His work has even resonated in the halls of Congress.

He has been named one of “50 visionaries changing your world” in a list headed by the Dalai Lama. In 2013, no one was surprised when former U.S. first lady, Michelle Obama, acknowledged Parvez’s work as “heroic.” In 2016, he shared a “Human Rights Defender” award from Amnesty International with Ensaf Haidar, the wife of imprisoned Saudi blogger Raif Badawi.

Parvez has been a blogger/columnist for websites like the Huffington Post, the Daily Beast and the Guardian. His two films in the past decade and his recent book, A Sinner in Mecca (A Gay Muslim's Hajj of Defiance) (published to acclaim in 2017), complete what is known as "The Islam Trilogy" The Guardian said the book was, “written by a man with a deep knowledge of Islamic history…with courage and fierce emotion.” Towleroad wrote that Parvez “[helps us] gain perspective on extremists and religion, but also acts as a glass to view the world here in the United States, the challenges felt by the Muslim community, and the oppressive weight of the Trump administration."

In the book Parvez says, “All of our last and most bitter battles will be fought on the frontlines of race and religion. And they are here. The Donald Trump presidency was not surprising to me. I predicted it, to the chagrin of many. But for me he is a natural outcome after eight years of Barack Obama and is the beginning of the decline of American civilization as we used to know it ” Till recently in rehab for his “Game of Thrones” addiction he has emerged refreshed and thrilled with one game-changing new film (in production) and two (in development). He seeks courageous Daenerys Targaryen’s and Jon Snow’s to partner with in these shiny new (not really gay or Islamic) peregrinations.

Some of his work can be seen on Netflix, Amazon Prime, 33 television channels in as many nations and iTunes. His recent book is available from Amazon to Barnes and Noble and everything in between (including Kindle and an author-read audio book).

A Sinner in Mecca Trailer
A Jihad for Love Trailer