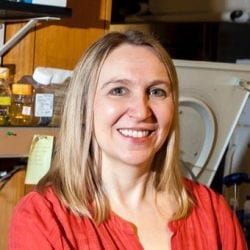 In collaboration with members of her laboratory, Professor Wittkopp studies the genetic basis of trait differences within and between species, with an emphasis on the regulation of gene expression. Both fruit flies and baker’s yeast are used as model systems in this work, integrating methods from molecular and developmental biology, population and quantitative genetics, and genomics and bioinformatics. Professor Wittkopp was named a “Scientist to Watch” by The Scientist magazine, an Alfred P Sloan Research Fellow, a March of Dimes Starter Scholar, and, most recently, a recipient of the Society for the Study of Molecular Biology’s Margaret Dayhoff Mid-Career Award. Professor Wittkopp is also a passionate teacher and mentor whose efforts have been recognized by multiple awards at the University of Michigan and membership on Education Committees for the Genetics Society of America and the Pan-American Society for Evolutionary Developmental Biology. Currently, Professor Wittkopp serves as a Senior Editor at the journal eLife and Associate Editor at the journals Molecular Biology and Evolution and GENETICS. She has presented her research in more than 150 invited talks in 18 different countries.