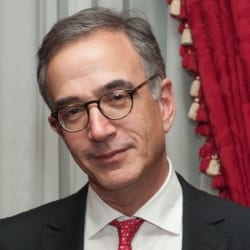 Paul Friedland is Professor of History at Cornell University. He is a political, cultural, and intellectual historian of France and the French Atlantic, specializing in the period of the French Revolution.

Friedland’s first book, Political Actors: Representative Bodies and Theatricality in the Age of the French Revolution (Cornell, 2002), focused on parallel transformations in the conceptualization of representation on both the theatrical and political “stages” of Revolutionary France. His second book, Seeing Justice Done: The Age of Spectacular Capital Punishment in France (Oxford, 2012), explored the theory and practice of capital punishment from the spectacles of suffering in the Middle Ages to the invention and deployment of the guillotine during the French Revolution.

As a Guggenheim Fellow, Friedland will be working on a book tentatively entitled A World without Race: The Dream of a Universal Republic in the Revolutionary French Caribbean, 1794-1802.

Friedland has been a Fellow at the Shelby Cullom Davis Center for Historical Studies at Princeton University and a Member of the School of Social Science at the Institute for Advanced Study in Princeton. He has received fellowships from the American Council of Learned Societies and the National Endowment for the Humanities and was awarded the David Pinkney prize by the Society for French Historical Studies.