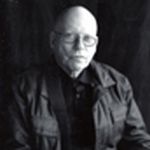 After studying the classics, philosophy, and art history at Brown University, Paul Laffoley studied architectural design at the Harvard School of Design, and the Department of Architecture at MIT. In 1963, he moved to New York City to apprentice with the visionary architect Frederick J. Kiesler. While in New York he also worked on Minoru Yamasaki’s twin-towered World Trade Center in lower Manhattan. He was assigned to design floors 15 to 45 in Tower Two.

Laffoley returned to Boston in 1964, where he has lived and worked ever since. In 1971 he founded the Boston Visionary Cell, Inc., an association dedicated to visionary art. It is still in operation today. For over four decades, Laffoley has worked toward a concept of what he calls “utopic space”—a realization of a transdisciplinary worldview capable of sustaining human existence into a continuous future.

My work is the product of the convergence of the instantaneous practice of invention and the slow craft of art. I have always believed that my period of most complete expression and appreciation would be my late future and, beyond, in “time phase X.” The final phase of modernism in the Western world began with the year 2000 A.D., and was consummated by September 11, 2001, and will continue for the next one hundred years. My term for this period is the “Bauharoque.” It combined the heroic modernism of the German “Bauhaus,” with its aspiration toward a technological utopia, and the exalted theatricality of the Italian baroque, in which an exuberance of form and illusion serve to express the mystical union of art and life.

Photograph by Daniel Dror, courtesy of the artist and Kent Gallery, New York.

Follow this link to Kent Gallery for more information about Paul Laffoley.