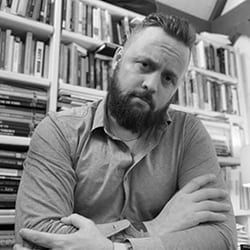 Peter Christensen in an historian of architecture and infrastructure and Associate Professor of Art History and Visual and Cultural Studies at the University of Rochester. He is the author of Germany and the Ottoman Railways: Art, Empire, and Infrastructure (Yale University, 2017; winner of the 2020 Alice Davis Hitchcock Award from the Society of Architectural Historians for the most distinguished work of scholarship by a North American scholar) and the forthcoming book Materialized: German Steel in Global Ecology (Penn State Press, 2022) in addition to over one hundred edited volumes, articles, chapters, reviews, and catalogue and encyclopedia entries. He is the recipient of fellowships and grants from the School of Historical Studies at the Institute for Advanced Study at Princeton, the National Endowment for the Humanities, a Fulbright Fellowship, the Richard Rogers residency at the Harvard Graduate School of Design, the New York State Council for the Arts, the Paul Mellon Centre for British Art, and the Forum Transregionale Studien in Berlin, among others. Christensen’s fellowship will be spent researching and writing his third sole-authored book, tentatively titled “The Architectural Patent: Inventing Modernity.” The book will examine the transformative role played by global patent culture in the formation of both architecture in the 19th and 20th centuries and modern conceptions of authorship in the field of architecture.