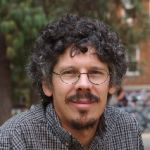 Petr Janata is a cognitive neuroscientist specializing in studies of auditory and music cognition. He received his Ph.D. in 1996 from the University of Oregon, where he performed electrophysiological studies of auditory object representations in the barn owl brain and musical image formation in the human brain. As a postdoctoral fellow at the University of Chicago from 1997 to1999 he used electrophysiological and computational approaches to investigate song perception and song learning in songbirds. In 2000 he joined the research faculty at Dartmouth College where he resumed his long-standing line of music perception research, initiated over a decade earlier as an undergraduate at Reed College and continued as a Fulbright Scholar in Vienna, Austria. Since 2004 he is a faculty member of the Center for Mind and Brain at UC Davis, where he continues to use music and neuroimaging tools as a means of understanding how the brain organizes complex human behaviors. Janata uses a wide array of behavioral, physiological, and computational techniques to examine challenging but far-reaching issues pertaining to ways in which music and musical experiences are manifested in the brain. More recently, this work has been supported by a Templeton Advanced Research Program grant from the Metanexus Institute to study “Music, Spirituality, Religion, and the Human Brain,” and a Fulbright Fellowship to spend time at the Czech Academy of Sciences in Prague studying advanced techniques in neuroimaging data analysis.