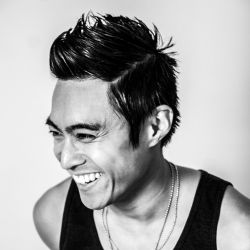 PJ is an award‐winning queer, filipinx filmmaker who resides in the red state of Texas. Born to immigrant parents and having grown up in a small, white, conservative town in California’s central valley, PJ's outsider experience has greatly shaped his filmmaking practice. PJ’s work explores the overlooked subcultures and identities within the already marginalized LGBTQ+ community.

Named one of Out Magazine's "Out 100" and FILMMAKER Magazine's "25 New Faces of Independent Film," PJ’s film credits include TRINIDAD (Showtime, LOGO) and BEFORE YOU KNOW IT, described as "a crucial new addition to the LGBT doc canon" by indieWIRE. BEFORE screened theatrically and broadcast premiered as the season finale of AMERICA REFRAMED on PBS, and was recently awarded the National Gay and Lesbian Journalist Association Excellence in Documentary Award 2016. PJ is currently working on UNTITLED JENNIFER LAUDE DOCUMENTARY an intimate, investigation about the brutal murder of a transgender Filipina by a US Marine. UNTITLED is currently supported by Ford Foundation, Betha Foundation, Sundance Film Institute, Arcus Foundation, Center for Asian American Media, Fork Films and Austin Film Society.

Also an accomplished cinematographer, PJ shot the Academy Award‐nominated Best Documentary TROUBLE THE WATER, and is a transmedia artist who collaborates with performance artist CHRISTEENE. PJ and CHRISTEENE’s work has screened widely at film, music and art venues around the world, and is hailed by the Hollywood Reporter as “…something you desperately wish you could un-see.”

In addition to his Guggenheim Fellowship, PJ is also a 2016 Firelight Media Fellow, and a 2017 Robert Giard Fellow.