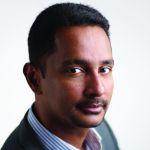 Renowned astrophysicist and award-winning science writer, Ray Jayawardhana is a Professor and Canada Research Chair in Observational Astrophysics at the University of Toronto. A graduate of Yale and Harvard, he uses many of the world’s largest telescopes to explore planetary origins and diversity. He is the coauthor of over one hundred papers in scientific journals. His research findings have made headlines worldwide, including in the Economist, Washington Post, New York Times, Newsweek, Globe & Mail, Sydney Morning Herald, BBC, NPR, and CBC, and have led to numerous accolades such as the Steacie Prize, Steacie Fellowship, Rutherford Medal, McLean Award, and Radcliffe Fellowship. Ray’s writing has appeared in the Economist, New York Times, Boston Globe, Scientific American, Astronomy, Muse, and elsewhere, and has won the American Institute of Physics Science Writing Award. His book Strange New Worlds: The Search for Alien Planets and Life Beyond Our Solar System (2011), was a finalist for the Lane Anderson Award and the basis of The Planet Hunters television documentary on the CBC. His latest book is Neutrino Hunters: The Thrilling Chase for a Ghostly Particle to Unlock the Secrets of the Universe (2013). Ray is also a popular speaker and a frequent commentator for the media, and has created innovative science outreach programs such as CoolCosmos, featuring 3,000 ads in Toronto’s transit vehicles. An avid traveler, he has visited more than fifty-five countries, all seven continents, and the high Arctic. Ray’s adventures have taken him from the steamy depths of a South African mine to the arid mountain peaks of the Chilean Andes; he has camped out on a remote ice field in Antarctica for five bone-chilling weeks and experienced the thrill of weightlessness on a parabola-hopping aircraft high above the Atlantic.