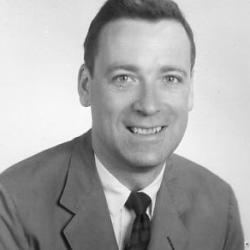 Richard A. Easterlin is currently University Professor and Professor of Economics, University of Southern California. He is a member of the National Academy of Sciences and a Fellow of the American Academy of Arts and Sciences.

Dr. Easterlin is an internationally renowned scholar for his work in economic history, economic demography, and subjective well-being. He has written extensively about the spread of modern economic growth, including its causes and consequences. Dr. Easterlin’s work in economic demography has focused on long swings in the population and economy, the American baby boom and bust, the demographic transition from high to low fertility, and the revolution in mortality. He is known for his Easterlin Hypothesis, which he presented in his 1978 PAA presidential address titled “What Will 1984 Be Like? Socioeconomic Implications of Recent Twists in Age Structure.” In this paper, Dr. Easterlin demonstrated that since World War II the labor market outcomes of a cohort, including its relative income, were determined by the relative size of the cohort. This, in turn, affects the cohort’s fertility decisions, creating the potential for continuing fluctuations in the relative size of birth cohorts. He is author of The Reluctant Economist (2004), Growth Triumphant: The 21st Century in Historical Perspective (1996), Birth and Fortune: The Impact of Numbers on Personal Welfare (1980; 2nd ed. 1987), and Population, Labor Force, and Long Swings in Economic Growth: The American Experience (1968) and editor of Happiness in Economics (2002). He also co-authored the book The Fertility Revolution with his wife Eileen Crimmins, a USC professor of gerontology, which established a supply-demand framework for analyzing the fertility transitions in developed and developing countries.

Dr. Easterlin is also the recognized founder of happiness economics. He is best known for the Easterlin Paradox presented in his seminal 1974 paper “Does Economic Growth Improve the Human Lot? Some Empirical Evidence.” This paper showed that, contrary to economic theory, as a society accumulates greater wealth over time, there is no corresponding increase in the happiness of its inhabitants. His happiness research is often cited in the popular press, including the Economist, the New York Times, and The Guardian. In recent years he has studied changes in subjective well-being over the life cycle, with a view to clarifying the relative role in determining people’s feelings of well-being of living levels, family life, health, and job conditions. His current research is on the association between long-term economic growth and subjective well-being. In his latest articles, Dr. Easterlin examines the relationship between the long-term rate of growth of GDP per capita and the happiness trend in developing, transition, and developed countries, and finds, consistently with the result of his 1974 paper, no relation between the two.