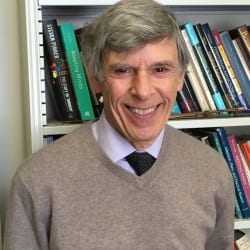 Richard Kraut has taught at Northwestern University since 1995, where he is the Charles E. and Emma H. Morrison Professor in the Humanities. He holds appointments in the Departments of Philosophy and Classics. He previously taught at the University of Illinois-Chicago (1969-1995). He received a B.A. from the University of Michigan in 1965 and a Ph.D. in Philosophy from Princeton University in 1965.

He is the author of Against Absolute Goodness (Oxford: 2011) and What is Good and Why: The Ethics of Well-Being (Harvard, 2007). His historical studies include Socrates and the State (Princeton: 1984), Aristotle on the Human Good (Princeton: 1989), Aristotle Politics Books VII and VIII , translation with commentary (Clarendon: 1997), Aristotle: Political Philosophy (Oxford: 2002), and How to Read Plato (Granta: 2008).

Kraut served as President of the American Philosophical Association, Central Division in 1993-94. He has since 2006 been a member of the American Academy of Arts and Sciences Since 2013, he has been Northwestern University’s Director of the Brady Scholars Program in Ethics and Civics Life.

He has received fellowships from the American Council of Learned Societies (1980-81), the Center for Hellenic Studies in Washington D.C. (Junior Fellow, 1980-81), the National Endowment for the Humanities (Fellowship for Individual Study and Research, 1987-88), Lady Margaret Hall, Oxford (Starr Visiting Fellow, 2007-08); and Corpus Christi College, Oxford (2016-17).

His current research concerns two puzzles about value. First, would the life of an oyster be better than any human life, if it were constantly pleasant and much longer than even the best of human lives? (Can a large enough quantity of good compensate for inferior quality?) Second, would it be good to live in a machine that simulates any experiences of our choosing? (We would be cut off from reality, but the quality of our experience would be everything one could desire.) Each puzzle sheds light on the other, and they lead to deep questions about the value of embodiment, sociality, art, and the natural environment.