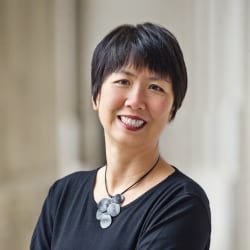 Rita Chin is a historian of comparative modern Europe. She is especially interested in immigration and human mobility, race and ethnicity, and the transformation of European societies in the wake of decolonization. Perhaps her most enduring intellectual concern has been to understand how Europeans have grappled with questions of difference and diversity. This commitment has often required denaturalizing concepts and categories such as “worker,” “immigrant,” “race,” and “multiculturalism,” whose meanings had previously seemed obvious and settled.

She is Professor of History at the University of Michigan in Ann Arbor. Born in Kuala Lumpur, Malaysia, she immigrated to the United States as an 11-month-old infant and was raised in Seattle, Washington. She earned her BA and MA from the University of Washington, and her PhD from the University of California, Berkeley, where she specialized in intellectual and cultural history. Except for short stints as a dissertation fellow at Pomona College (1997-98) and assistant professor at Oberlin College (1999-2002), she has spent her entire academic career at public universities.

She is the author of The Guest Worker Question in Postwar Germany (Cambridge University Press, 2007) and co-author with Heide Fehrenbach, Geoff Eley, and Atina Grossmann of After the Nazi Racial State: Difference and Democracy in Germany and Europe (University of Michigan Press, 2009). Her most recent book is The Crisis of Multiculturalism in Europe: A History (Princeton University Press, 2017), which has been reviewed in the New York Times Sunday Book Review, The Nation, and many of the leading newspapers across Europe. Her research has been supported by the Woodrow Wilson International Center for Scholars and Writers, ACLS Frederick Burkhardt Fellowship for Recently Tenured Scholars, and the Institute for Advanced Study.

As a Guggenheim Fellow, she will be working on a book about non-European women who migrated to postwar Britain to become domestic servants, a phenomenon which marked a major transformation of domestic labor in Europe. Unlike the Downton Abbey narrative, which suggests that domestic service had mostly vanished by the mid-twentieth century, her story proposes a more complicated transformation. Domestic servitude did not disappear, but changed color – from white, working class or Irish women to colonial and postcolonial, non-European women. Domestic service also changed locales: it waned as a privilege of the great aristocratic houses, even as it became a necessity for upper-middle-class households once growing numbers of educated and professionally ambitious women began to seek careers outside the home.