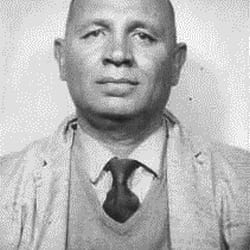 Romare Bearden, a leading twentieth-century painter and collage artist, was born in Charlotte, North Carolina, in 1911.  He grew up in New York and Pittsburgh, and his childhood memories of both cities would become frequent subject matter of his art later in life.  Mr. Bearden attended Boston University and graduated from NYU with a degree in education.   He studied art intensively as a student, and later worked as a cartoonist, editor, and art director for several journals and newspapers.   In addition to pursuing his art, Mr. Bearden was a social worker in New York for decades.  In the 1940s he held solo exhibitions in Harlem, downtown New York, and Washington, D.C., one of the few prominent African-American artists to exhibit artwork regularly at the time.   Mr. Bearden was an active part of the thriving intellectual and cultural life in Harlem, and a member of the Harlem Artists Guild, director of the Harlem Cultural Council, and a co-founder of The Studio Museum in Harlem, the Cinque Gallery, and the Black Institute of Arts and Letters.   He was also well known as an encouraging mentor for younger artists.  However, his interests extended beyond the visual arts: he was an avid reader and jazz aficionado.  He lived primarily in New York, with a second home in St. Martin, his wife’s native country.  He died in 1988, at seventy-five years of age.

Mr. Bearden’s work drew inspiration from his own childhood in Harlem, and is revered for his poignant illustrations of modern African American life.  His work displays influences ranging from the paintings of Giotto and Picasso to African sculpture and Japanese prints.  Early in his career, he worked reproducing Old Master paintings in black and white using Photostats.  In his examinations of color divorced from form, Mr. Bearden reversed the black and white tones in the works, creating a type of race reversal through picturing dark-skinned rather than light-skinned figures in the famous paintings.   He was at the center of cultural and political life in Harlem, and a founder of Spiral, a group of African American artists committed to communicating civil rights sentiments in their work.  Mr. Bearden’s collages originally began with a proposal for a collective collage initiative with the members of Spiral.  While the group expressed little interest in the idea, he began pursuing the art form seriously on his own, and is perhaps best known for these striking works.   He received particular acclaim for his Projections, large-scale reproductions of his collage works enlarged by using photographic processes.

Mr. Bearden’s prolific career covered a wide variety of mediums, including oil paintings, collage, drawings, prints, costume design, poster and cover design, mosaics, and tapestries.   He is the recipient of the Mayor’s Award of Honor for Art and Culture in New York, the National Medal of Arts, and a member of the National Institute of Arts and Letters.  His work is in the collections of the Whitney Museum of American Art and the Metropolitan Museum of Art in New York, the Art Institute of Chicago, and the Smithsonian Museum of American Art and the Library of Congress in Washington, D.C.

Mr. Bearden received a Guggenheim Fellowship in 1970 to work on a book on African-American art history.  The final product, A History of African-American Artists: From 1792 to the Present (Pantheon, 1993), was co-authored with Harry Henderson and published five years after Mr. Bearden’s death.  Mr. Bearden spent over a decade reconstructing biographies, interviewing artists, and tracking down artworks while writing the book, a landmark volume on the history of African American art.

For more information on Romare Bearden:

Romare Bearden at the National Gallery of Art