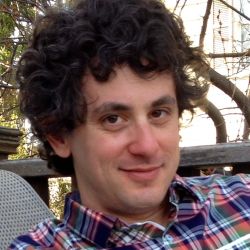 Ross Benjamin is a translator of German-language literature living in Nyack, New York. He is enormously grateful to receive a Guggenheim Fellowship for his work on the first English translation of Franz Kafka’s complete, unexpurgated Diaries, to be published by Liveright/Norton.

His previous translations include Friedrich Hölderlin’s Hyperion, Kevin Vennemann’s Close to Jedenew, Joseph Roth’s Job, and Clemens J. Setz’s Indigo. He was awarded a 2012 National Endowment for the Arts Literature Fellowship for Translation, the 2010 Helen and Kurt Wolff Translator’s Prize for his rendering of Michael Maar’s Speak, Nabokov, and a commendation from the judges of the 2012 Schlegel-Tieck Prize for his translation of Thomas Pletzinger’s Funeral for a Dog.

His literary criticism has appeared in The Times Literary Supplement, Bookforum, The Nation, and other publications. He was a 2003-2004 Fulbright Scholar in Berlin and is a graduate of Vassar College.