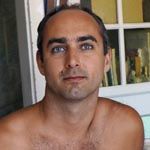 Scott Conarroe's large-format photos evoke romantic pictorial traditions.  His studies of sprawling geo-cultural features locate the present in a sweep of history.  His series By Rail and By Sea look at railways and the coastline perimeter of the United States and Canada; they depict the westernmost front of Western Civilization as a vast bloc of Cold War superpower and British Empire outpost.  The Great Eastern considers China against the backdrop of a massive railway expansion.  And Frontière, Frontiera, Grenze, Scott's Guggenheim Fellowship project, looks at the movable borders four Alps nations have negotiated in response to acute glacial melting and watershed drift.

Scott Conarroe has a B.F.A. from the Emily Carr Institute of Art and Design and an M.F.A. from the Nova Scotia College of Art and Design.  He has been artist-in-residence at Light Work (US), Villa Sträuli (CH), and FLACC (BE), and a Canadian Armed Forces Civilian Artist (Arctic Ocean).  Among his numerous awards are grants from the Canada Council for the Arts, the Ontario Arts Council's 2008 Chalmers Fellowship, and the 2011 Duke and Duchess of York Prize for Photography.  His work is in many public and private collections including the National Gallery of Canada, the Carnegie Museum of Art, and the Art Gallery of Windsor.

Scott is represented by the Stephen Bulger Gallery, he teaches at Emily Carr University of Art and Design, and he seems to live in the village of Keremeos, British Columbia.