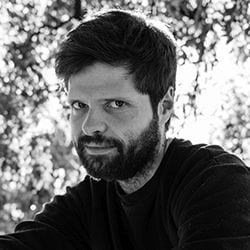 Sean Buckelew is an award-winning animator and director based in California. He received his MFA from the California Institute of the Arts in Experimental Animation and a BFA from the School of the Art Institute of Chicago. In 2016 he was the recipient of the ADC Young Gun Award.

As an independent animator, his recent work focuses on the social and cultural politics of emerging technology, reflecting on the ubiquity of living in the present moment, and going on an archaeological dig for the invisible processes that got us here, imagining alternate routes to what feels like an inevitable future. His newest short in production, DRONE, takes a satirical look at the sensationalism surrounding a failed PR stunt by the US military, asking difficult questions about humankind’s ethical complacency in the development of convenient and sometimes sinister technology.

His films have been featured at many prestigious festivals including Slamdance Film Festival, Ottawa International Animation Festival, Palm Springs International ShortFest, and Animafest Zagreb. He also works as a freelance animator on commercial projects including feature films and TV.

Additionally, Sean has given numerous talks and workshops and is a member of the international animation collective Late Night Work Club. He is president of the board of directors and head programmer at the GLAS Animation Festival, held annually in Berkeley, CA.

Lovestreams (2017): An ode to a lost age of Internet love.
The American Dream (2013): A young woman decides to buy a motorcycle on eBay.