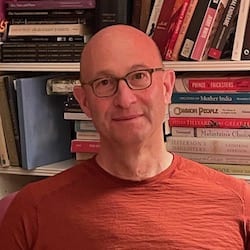 Seth Koven is G. E. Lessing Distinguished Professor of History and Poetics at Rutgers University, where he teaches modern European women’s and gender history as well as the history of modern Britain and its Empire. His scholarship at the intersection of history and literature explores the redemptive possibilities and thorny problems posed by goodness as a subject of historical inquiry. His prize-winning books capture women and men as they made difficult ethical and moral choices about how to transform their world. Slumming: Social and Sexual Politics in Victorian London analyzed the disturbing and consequential entanglement of eros and altruism in the making of modern philanthropy and welfare. The Match Girl and the Heiress explored the Christian revolutionary love between two women, separated by an immense class divide, as a crucible for making a just society committed to breaking down hierarchies of class, race, sex and gender. His current work, Conscience Wars: Christianity and Coercion in Modern Britain and its Empire tackles exigent questions in our world today such as whether parents possess conscience-based rights to refuse compulsory, state mandated vaccination of their children. A graduate of Swarthmore College and Harvard University, he lives just outside of Philadelphia in Havertown, PA.