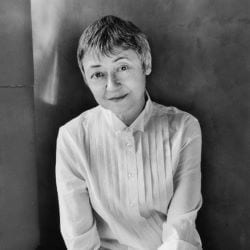 Sigrid Nunez has published seven novels, including A Feather on the Breath of God, The Last of Her Kind, Salvation City, and, most recently, The Friend. Her eighth novel, What Are You Going Through, will be published in September, 2020. Nunez is also the author of Sempre Susan: A Memoir of Susan Sontag. The Friend was a New York Times best-seller, an Indie National best-seller, and a critics' top book of both The New York Times and The Times (UK). It won the 2018 National Book Award and was a finalist for the 2019 Simpson/Joyce Carol Oates Prize. Nunez's other honors and awards include a Whiting Writer's Award, a Berlin Prize Fellowship, the Rosenthal Family Foundation Award of the American Academy of Arts and Letters, and the Rome Prize in Literature. Nunez's work has either been or is being translated into more than twenty languages. Currently writer in residence in the creative writing department at Boston University, she lives in New York City. Photo Credit: Marion Ettlinger