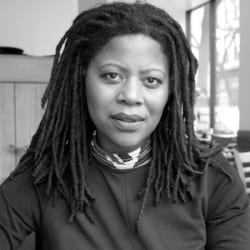 Simone Leigh's practice is an object-based ongoing exploration of black female subjectivity. She creates sculpture, videos and installations informed by her interest in African art, ethnographic research, feminism and performance. Her sculpture, often large installations, is informed by an ongoing interest in the anonymity of women’s piece-work and has evolved into an obsessive repetition of form, whether in hand-crafted roses, made petal by petal, or in glazed and fired cowrie shells made from watermelon molds that evoke both ancient artifacts and open-ended metaphors for the female body.

Leigh received the 2013 Louis Comfort Tiffany Foundation Biennial Award and was a recipient of The Joan Mitchell Foundation’s Painters & Sculptors Grant in 2011. She is a Creative Capital Grantee (2012) and a recipient of the LMCC Michael Richards award (2012). Leigh participated in The Studio Museum in Harlem’s artist-in-residence program from 2010–11; the Art Matters research grant (2009); the New York Foundation for The Arts Fellowship for Sculpture (2009); and The Lower Manhattan Cultural Council’s Workspace program (2007-08). Leigh’s social practice work Free People’s Medical Clinic, a project commissioned by Creative Time, was installed at Stuyvesant Mansion, Brooklyn, New York in 2014. Leigh was a facilitator of the 2012 and 2014 Asiko International Art School founded by Bisi Silva and Centre for Contemporary Art, Lagos, Nigeria. Leigh has upcoming solo presentations at The New Museum, The Hammer Museum and The Tate Modern as well as an outdoor sculpture project with The Studio Museum in Harlem. Recent solo presentations include: I ran to the rock to hide my face the rock cried out no hiding place at Artspace at KCAI, MO (2016); Moulting at Tilton Gallery, NY (2015); Crop Rotation at KMAC, KY (2015); Gone South at Atlanta Contemporary Art Center, GA (2014); and You Don’t Know Where Her Mouth Has Been at The Kitchen, NY (2012). Leigh was included in the fourth iteration of Greater New York at MoMA PS1, NY (2015-16); The Grace Jones Project at MoAD, CA (2016); Unconventional Clay at the Nelson–Atkins Museum of Art, MO (2016); and the Dak’Art Biennale, Dakar, Senegal (2014). Her work and writing has been featured in several publications including Artforum, Bomb Magazine, The New Yorker, The New York Times, Modern Painters, The Brooklyn Rail, Small AxE, Nka: Journal of Contemporary African Art and Art in America. Leigh’s work is in the permanent collections of The Studio Museum in Harlem and the Newark Museum.