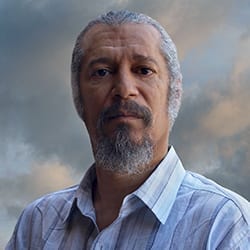 Stephen Marc is a documentary/street photographer and digital montage artist, who was raised on the South Side of Chicago, and claims Champaign-Urbana, IL as his home away from home while growing up. Marc lives in Tempe, AZ and is Professor of Art at Arizona State University, where he began teaching in 1998, after twenty years on the faculty of the Department of Photography at Columbia College Chicago. He received his BA from Pomona College and his MFA from Tyler School of Art, Temple University.

Marc has published four photography books: American/True Colors (Co-published with George F. Thompson Publishing and Stephen Marc in association with the Center for the Study of Place, 2020), Passage on the Underground Railroad (University Press of Mississippi, 2009), The Black Trans-Atlantic Experience: Street Life and Culture in Ghana, Jamaica, England, and the United States (Columbia College Chicago, 1992), and Urban Notions (Ataraxia Press, 1983). Since 2008, Passage on the Underground Railroad has been listed as an Interpretative Program of the National Underground Railroad Network to Freedom, a division of the National Park Service.