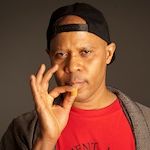 I was born and raised in Chicago, Illinois, a city that has always had a very distinctive character. The particular part of the city that I grew up in (the South Side) also had quite an esoteric and mystical tendency, but I was not aware of this when I was younger, only seeing this in terms of imagination. I began playing music in high school around the age of fourteen, but really became serious about it four years later, when I made the decision to learn how to improvise. However, my real education began on the streets of Chicago, in the form of rehearsals during the day and immersing myself in the South Side’s teaming creative music scene during many long nights. My goal was to learn how to spontaneously compose, and I pursued this goal by following around elder master musicians, learning from them whatever I could. My main direct influences were Von Freeman, Sonny Stitt, and Bunky Green, whose performances I would attend as much as possible. After I moved to New York City in 1978, I continued this approach by apprenticing in the ensembles of Thad Jones, Sam Rivers, Doug Hammond, Abbey Lincoln, Dave Holland, Cecil Taylor, and many other great creators. Simultaneously, I also strove to develop my own sound and way in music, which is what I was encouraged to do by my mentors. Eventually, my musical interests took on a more global flavor as I began to travel around the world checking out masters of varied traditions, but particularly the various musical dialects of the African Diaspora. Over the years, the earlier influences from living in Chicago reemerged in the form of an intense interest in nature, history, ancient metaphysical concepts, time and space, as well as the use of sonic symbols to express the nature of human existence. These areas have had a deep impact on my music, which are predominantly reflected in the motion of the music, in particular, the rhythm and timing, which deals with various relationships of cycles, a subject loosely termed harmonics. There extends back into ancient times a tradition of musicians who have attempted to express, through music, their relationship to Nature, and I feel that this is the driving force behind many of the so-called innovations in music (and indeed in other fields as well). In my music, I have utilized various kinds of musical structure and temperament to symbolize the specific kinds of musical movement necessary to reference various states of energy, with the concepts of change, process, and growth being central to my work. Specifically, I believe that it is through the spontaneous composition of forms that my ideas can be most readily expressed, regardless of external stylistic appearances.