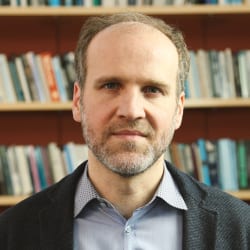 A native of Trikala Greece, Stratis Papaioannou is currently an Associate Professor of Classics at Brown University where he also directs the Medieval Studies program. He has studied in Athens and Vienna, and taught at The Catholic University of America, at Dumbarton Oaks, at the American School of Classical Studies at Athens, and at the École des Hautes Études en Sciences Sociales in Paris.

His field of expertise is the literature and culture of Byzantium. His publications include: Michael Psellos: Rhetoric and Authorship in Byzantium (CUP 2013), Christian Novels from the Menologion of Symeon Metaphrastes (HUP 2017), and Michael Psellos on Literature and Art: A Byzantine Perspective on Aesthetics, with C. Barber (NDUP 2017). His most recent project, a critical edition of the letter collection of Michael Psellos (11th c.; Constantinople), based on 48 medieval and early modern manuscripts, is currently in press and will be published by Walter de Gruyter (Berlin and New York). Papaioannou also maintains a bibliographical essay on Byzantine manuscript books

His Guggenheim project is a narrative History of Byzantine Literature (330 CE-1453 CE). Caught between East and West, Byzantine texts and stories once offered an influential language of expression, understanding, and imagination of oneself and of the world, shared by a wide variety of populations in the Mediterranean and Europe. Yet their study is today a fragile enterprise, as they remain largely inaccessible to modern readers and somewhat exoticized by the relatively recent dominance of Western European tastes and choices on the canon of “good” literature. The proposed project seeks to tell the story of this forgotten discursive tradition.