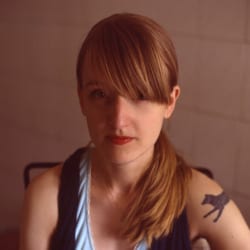 A major pleasure of reading is the stream of images that comes bidden into one's head over the course of a book, produced by the exchange of one's memory and the author's imagination and occasionally syncing with, but always illuminating, the words. In Sue de Beer's work since the early 2000s, we get to see - the way we don't see our own - her personal image-streams on a wall, excellently crystallized into a series of lucid and fey film installations: Disappear Here, 2004, with a title from Bret Easton Ellis and a monologue from an untitled (and so far unreleased) novel by Alissa Bennett; Black Sun, 2005, with a title from Julia Kristeva and texts from two Dennis Cooper novels; The Quickening, which was based on writings by Joris-Karl Huysmans and Jonathan Edwards. Her latest, The Blue Lenses, 2015, relies again on Suspiria-type style and At Land-ish narrative, not plot, to give us horror in its truest form: life.
--Sarah Nicole Prickett, Artforum September 2015

Sue de Beer's work is located at the intersection between film and installation, sculpture and photography. Solo exhibitions include the Kunst Werke, Berlin, the Whitney Museum of American Art at Altria, the MuHKA Museum in Antwerp, Los Angeles Contemporary Exhibitions in Los Angeles, The Park Avenue Armory, New York, as well as Marianne Boesky Gallery in New York, where she is represented. Her work has been included in group exhibitions in such venues as the New Museum, the Whitney Museum of American Art, PS1/MOMA, the Brooklyn Museum, the Reina Sofia in Madrid, the Kunst Werke, the Zentrum für Kunst und Medientechnologie, Haus der Kunst, and the Kunsthalle Shirn in Germany, the Neue Gallerie am Landes Museum Joanneum in Austria, the Deste Foundation in Greece, and the Museum of Modern Art, Busan, in Busan, South Korea. Her 2-channel video installation, ‘Hans & Grete’ was included in the Whitney Biennial in 2004. De Beer’s work is in the permanent collections of the Museum of Modern Art, Whitney Museum of American Art, the New Museum for Contemporary Art, the Brooklyn Museum, the Deste Foundation, and the Goetz Collection. De Beer is an Associate Professor in Steinhardt’s School of Art and Art Professions at New York University.