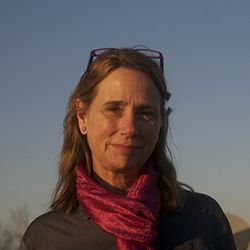 Bookmaking is central to Terri Weifenbach’s artistic practice. Since her first book, In Your Dreams, was published in 1997 she has published fourteen more titles including Lana, Politics of Flowers and Gift.

Raised in Washington, DC and educated at the University of Maryland, she spent a dozen years living in New Mexico and California before returning to the Washington, DC area where she resides today. Ms Weifenbach is renowned as a teacher. In addition to numerous lectures and workshops she has taught regularly at American University, Corcoran College of Art and Design and Georgetown University. She has had numerous one-person exhibitions in the United States, Europe and Japan and published widely in periodicals such as Audubon, Esquire and The New Yorker. Her work can be found in international collections such as the Center for Creative Photography in Arizona and the Sprengel Museum Hannover in Germany.

Ms. Weifenbach’s current book and exhibition project, Cloud Physics, was begun in 2014 and due to be completed in 2016 at the end of her Guggenheim Fellowship. According to her proposal it is “about what can be measured and what cannot, what can be seen outright and what cannot be seen. It is about science and climate. It is about the intersection of reason and sensibility.”