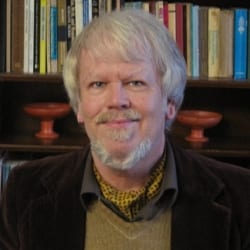 Classicist Thomas Hubbard had already published three books and dozens of articles on Greco-Roman literature and its legacy before he turned his attention in the late 1990s to a particularly sensitive and controversial aspect of Greco-Roman culture, namely the widespread practice of homosexual pederasty. Dissatisfied with existing treatments of the subject which either lacked theoretical nuance or were focused through the lens of modern moral constructions of child abuse, he sought a new conceptual framework for its widely varying manifestations in the ancient world, relating them to changing demographic, economic, and political forces, as well as differing social constructions of childhood and adolescence. This effort led him to publish another four edited volumes and a range of articles concerning ancient sexualities and their formative appropriation in modern sexual identities.

Prof. Hubbard brings to this question broad humanistic training, having received his undergraduate degree in English from Santa Clara University, his M.A. in Comparative Literature from the University of California, Berkeley, and his Ph.D. in Classics from Yale. He has held teaching positions at Bard College, Skidmore College, the University of Minnesota, and Cornell University prior to taking up his present position at the University of Texas, Austin, where he is now the James R. Dougherty, Jr. Centennial Professor of Classics. He has formerly held multiple fellowships from the National Endowment of the Humanities and the Alexander von Humboldt Foundation, as well as being a Fellow of the Institute for Advanced Study in Princeton.

His international and multi-disciplinary stature has been recognized by his invited lectures at numerous European and Australasian institutions, including the universities of Berlin, Munich, Münster, Basel, Amsterdam, Paris, Strasbourg, Exeter, Cambridge, and Crete, as well as leading American universities such as Yale, Princeton, Columbia, Cornell, New York University, Bryn Mawr, Virginia, Illinois, and UCLA.