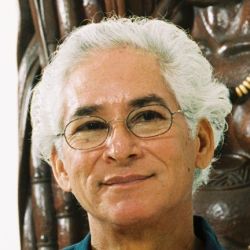 Puerto Rican sculptor Tomás Batista (b.1935), is one of the most prolific and important artists of his generation. Batista’s work is characterized by his public monuments, larger-than-life sculptures, and realistic style. His artwork is inspired by rural life, nature, fauna and flora, racial amalgamation, distinguished men and women, religious images, and the history of the island of Puerto Rico. Batista is the creator of some of the major public monuments in Puerto Rico. Among his best known works are: Don Luis Muñoz Marín (1999); Cacique Loquillo (1993); Monumento al Jíbaro Puertorriqueño (1976); José Gautier Benítez (1973); and Eugenio María de Hostos (1967).

In 1958, he received a scholarship from the Institute of Puerto Rican Culture and began his formal artistic training with Spanish sculptor Francisco Vásquez Díaz (Compostela). In 1960, he was awarded a grant from the Institute of Puerto Rican Culture to study in Mexico, where he continued to advance his studies at “La Esmeralda” art school, where Batista studied with professors Fidencio Castillo and Benito Messeguer.

As a Guggenheim fellow, Batista was mentored by sculptors William Zorach and José de Creeft in New York. In 1965, he traveled to Spain through a grant from the Institute of Hispanic Culture. During his stay in Spain, he created the monument Eugenio María de Hostos and visited the major cities and museums in Europe. In 1965, his work “Caracol” was awarded Second Prize at the Sculpture Competition for Young Artists in Latin America sponsored by the Esso Company.

In 1966, he was appointed director of Sculpture and Restoration workshop at the Institute of Puerto Rican Culture, and taught sculpture at the School of Plastic Arts. In 1984, Batista organized the newly created Francisco Oller Museum, where he was later appointed director.

His works are in the Institute of Puerto Rican Culture; the Museum of Puerto Rican Art in San Juan; Ponce Museum of Art; Collection of the Lincoln Medical Center in the Bronx, N.Y.; and in private collections. The Francisco Oller Museum in Bayamón has a permanent hall dedicated to his work.

Follow this link for more information about Tomás Batista’s work.