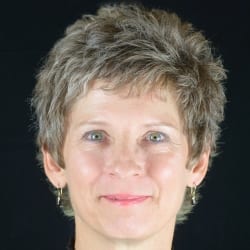 Valerie Traub is the Frederick G. L. Huetwell Professor of English and Women's Studies at the University of Michigan, where she served as Chair of the Women’s Studies Department from 2003 to 2009 and from 2014 to 2015. Working across the disciplines of literature and history, she is a specialist in the study of gender and sexuality in sixteenth and seventeenth century England. She is the author of three monographs: Thinking Sex with the Early Moderns (University of Pennsylvania Press, 2015), which is a finalist for a Lambda Literary Award; The Renaissance of Lesbianism in Early Modern England (University of Cambridge Press, 2002), which won the best book of 2002 award from the Society for the Study of Early Modern Women; and Desire & Anxiety: Circulations of Sexuality in Shakespearean Drama (Routledge, 1992, reissued 2014).

In addition to her monographs, she has edited several field-defining collections. Her most recent edited collection is The Oxford Handbook of Shakespeare and Embodiment (2016). She co-edited two earlier volumes, Gay Shame (University of Chicago, 2009)--which also was a finalist for the Lambda Literary Award--and Feminist Readings of Early Modern Culture (Cambridge University Press, 1996). She has published over thirty essays in peer reviewed journals and edited collections. She is currently working on another monograph, Mapping Embodiment in the Early Modern West: Anatomy, Cartography, and the Prehistory of Normality.

Traub’s work has been supported by the ACLS, the Huntington Library (Dibner History of Science Distinguished Fellow), the Newberry Library (National Endowment for the Humanities Award), and the Folger Library. She has twice won the Modern Language Association Lesbian and Gay Caucus Crompton-Noll Award for best essay. Much of her timer is spent working with graduate students at the University of Michigan and elsewhere. She received the John H. D’Arms Faculty Award for Distinguished Graduate Mentoring in the Humanities (2006), and has received as well several university awards for her scholarship and service. She has sat on the advisory boards of PMLA, SEL, GLQ, and Textual Practice and was a trustee of the Shakespeare Association of America from 2011-2014.