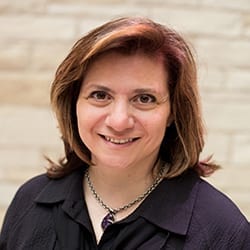 Vicky Kalogera is the co-founder and the current director of the Center for Interdisciplinary Exploration and Research in Astrophysics (CIERA) and the Daniel I. Linzer Distinguished University Professor in the Department of Physics and Astronomy in the Weinberg College of Arts and Sciences at Northwestern University. Kalogera is a leading astrophysicist in the LIGO Scientific Collaboration (LSC), LIGO being the telescopes that first detected gravitational waves in 2015. Kalogera is an expert in the astrophysics of black holes and neutron stars and in gravitational-wave data analysis; she also studies the formation and evolution of stars and their remnants detectable as gamma-ray, X-ray, and radio pulsar sources in the electromagnetic spectrum in a wide range of stellar environments. Her research involves methods from applied mathematics, statistics and computer science, with extensive use of high-performance computing. For her research she has been recognized by numerous awards, including election to the US National Academy of Sciences in 2018 and the American Academy of Arts and Sciences in 2021, and has served the professional community in several roles, including as co-chair of the Committee on Astronomy and Astrophysics of the National Academy of Sciences.