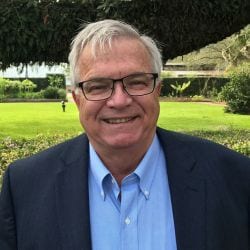 William Balée is a cultural anthropologist with a long-term focus on the peoples, societies, and landscapes of the Amazon River region. After having earned a PhD at Columbia University, based on fieldwork he did among the Ka’apor people of the extreme east of the Amazon region, he held appointments at the New York Botanical Garden and the Goeldi Museum (Brazil). He is currently Professor of Anthropology at Tulane University, where he has taught since 1991. Both his first scholarly monograph on the Amazon, Footprints of the Forest; Ka’apor Ethnobotany: The Historical Ecology of Plant Utilization by an Amazonian People (Columbia University Press, 1994) and his second one, Cultural Forests of the Amazon: A Historical Ecology of People and their Landscapes (University of Alabama Press, 2013), received the Mary W. Klinger Book Award from the Society for Economic Botany. The late Prince Bernhard of the Netherlands appointed him Officer of the Order of the Golden Ark (a Dutch conservation merit order) in 1993. He is one of the founders of historical ecology as a research program; he has, in fact, been genuinely interdisciplinary in outlook since the beginning of his career. His postdoctoral research has been supported by grants from Fulbright, Wenner-Gren Foundation, Edward John Noble Foundation, World Wildlife Fund, and the Environmental Defense Fund. In 2016, he won the President’s Award for Excellence in Graduate and Professional Teaching from Tulane. He has lectured at many academic settings in the United States and around the world, including Brazil, Ecuador, India, Malaysia, Vietnam, and Japan. His research has been continuously noted over the past thirty years, particularly in the fields of archaeology, ecology, and ethnobiology. Most recently he has done fieldwork with indigenous groups and forest peasants exhibiting traditional lifestyles in tropical forests of Malaysia, Ecuador, and Brazil, and studied their historical and contemporary engagements with the flora and fauna of their landscapes. His empirical work in the field to date has led up to a personal and professional readiness to describe the lower Amazon (the area of the Amazon River estuary and surroundings) in its remarkable diversity in several senses--biological, ecological, cultural, and linguistic—all within a historical framework intelligible to an educated audience.