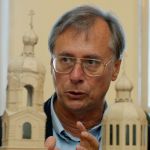 William Craft Brumfield is Professor of Slavic Studies at Tulane University, where he also lectures at the School of Architecture. He received his Ph.D. (1973) in Slavic languages (specializing in 19th-century Russian literature and history) from the University of California, Berkeley. From 1974 to 1980 he held an appointment as Assistant Professor of Slavic Languages at Harvard University; he has also been a visiting faculty member at the Universities of Wisconsin (1973-74) and Virginia (1985-86).

In addition to his Guggenheim Fellowship, he has received support from the National Endowment for the Humanities (NEH), the National Humanities Center, the Kennan Institute for Advanced Russian Studies (at the Woodrow Wilson Center), the American Council of Teachers of Russian (ACIE), the National Council for Eurasian and East European Research, International Research and Exchanges Board (IREX), the Kress Foundation, the Woodrow Wilson Foundation, and the Trust for Mutual Understanding. Tulane University has honored him with a Faculty Research Award from the Faculty of Liberal Arts and Sciences (1997) and the Provost’s Award for Excellence in Research and Scholarship (2005).

Mr. Brumfield is the author of numerous books on Russian architecture, illustrated with his own photography: Gold in Azure: One Thousand Years of Russian Architecture (Boston: Godine, 1983); The Origins of Modernism in Russian Architecture (Univ. of California Press, 1991); A History of Russian Architecture (Cambridge UP, 1993; 2d expanded ed., Univ. of Washington Press, 2004), which the New York Times Book Review included in its list of Notable Books of the Year 1993; Lost Russia: Photographing the Ruins of Russian Architecture (Duke UP, 1995); Landmarks of Russian Architecture: A Photographic Survey (Gordon and Breach Publishers, 1997); Vologda Album: Photographing Architectural Monuments in the Vologda Region (Tri Quadrata, Moscow, 2005); Velikii Usitiug (2007); Kirillov. Ferapontovo (2009); and Sotsial’nyi Proektv Russkoi Literature XIX Veka (The Social Project in Russian Literature of the 19th Century) (Moscow, 2009).  He is also the author of the eleven-volume series Architectural Heritage in Photographs, published in Moscow, each volume of which features a different city : Totma (2005); Irkutsk (2006); Tobolsk (2006); Solikamsk (2007); Cherdyn (2007); Kargopol (2007); Chita (2008); Buriatiia (2008); Solovki (2008); Kolomna (2009); and Suzdal (2009). He was the compiler of An Architectural Survey of St. Petersburg, 1840-1916: A Building Inventory (Kennan Institute/Woodrow Wilson Center, 1994). He has also been the editor of or contributor to many volumes, including Reshaping Russian Architecture: Western Technology, Utopian Dreams (Cambridge UP/Woodrow Wilson Center, 1990), Christianity and the Arts in Russia (Cambridge UP, 1991; paperback, 2008), Russian Housing in the Modern Age: Design and Social History (Cambridge UP/Woodrow Wilson Center, 1993), and Commerce in Russian Urban Culture, 1861-1914 (Johns Hopkins UP, 2001). The last two books listed have appeared in Russian editions.

He is the author of numerous other publications, in both Russian and English, on Russian architecture, photography, and literature, and he frequently lectures on these topics at museums and universities in North America and in Europe. His photographs of Russian architecture, which have been exhibited at numerous galleries and museums in the US, Russia, France, and Canada, are part of the collection of the Photographic Archives at the National Gallery of Art, Washington, D.C. A collection is also held in the Prints and Photographs Division of the Library of Congress and displayed at the following LC site: frontiers.loc.gov/intldl/mtfhtml/mfdigcol/mfdcphot.html

Mr. Brumfield’s collection of photographs is currently being scanned and electronically archived with the assistance of a major grant from the National Endowment for the Humanities and the University of Washington Libraries.

He has lived in Russia for a total of twelve years, and has done graduate and postdoctoral research at Moscow and Leningrad Universities (on IREX fellowships), as well as at the Russian Institute of Art History in Moscow. He has also been the co-director of the NEH Summer

Institute for College and University Faculty “Moscow: Architecture and Art in Historical Perspective,” held in Moscow during the summer of 1994, and subsequently conducted faculty summer seminars in various parts of Russia under the auspices of the Russian Institute of Art History. Mr. Brumfield is currently involved in photographing and documenting Russian architectural monuments from the Urals to the Pacific as part of the Library of Congress project “Meeting of the Frontiers.”

Follow this link to view William Brumfield’s page on The Library of Congress website for more information about his work.

Follow this link to a Russian website devoted to Mr. Brumfield’s work in the North (in both English and Russian).