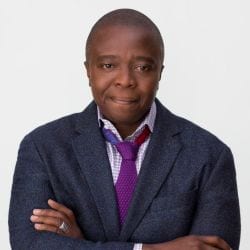 Yance Ford is an Oscar nominated, Emmy winning director and producer based in New York City. His debut film Strong Island was nominated for Best Documentary Feature at the 90th Academy Awards where Ford made history as the first openly transgender director nominated for the Oscar.

Strong Island received the Gotham Award for Best Documentary, among many other and the film won a 2017 Sundance U.S. Documentary Special Jury Award. The Guardian wrote of the film: ‘There’s something different about Strong Island, however, a film characterized by raw emotion and calm anger, [Strong Island] must surely be considered one of the finest documentaries of 2017’’

Ford is also a former Series Producer at the documentary series POV. His curatorial work there was recognized with 5 Emmy Awards and 16 Emmy nominations.

He began development on Untitled Blackness while Sundance Art of NonFiction grantee in 2017.