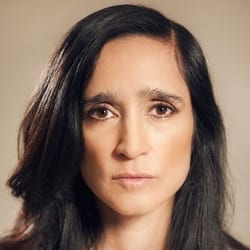 Born in Long Beach, California (1970), grew up in the Tijuana-San Diego border, Yvonne Venegas has been working with the photographic medium since 1992. She studied the certificate program at the International Center of Photography and later obtained her MFA from University of California San Diego (2009).

In 1994-96 she produced her first project for which she received the Baja California Art Fund grant, and did the series titled Portraits from Tijuana, and with it first learned about her interest in the pulsating space located between the perfect moment and one considered an error, as well as the possibility of portraiture as a form of exploring ideas.

In 2002 she received first prize in the X Bienal de Fotografia Mexicana, organized by the Centro de la Imagen and Conaculta, for the work Las Novias mas hermosas de Baja California, (The most beautiful brides of Baja California) a 4 year investigation about Tijuana’s upper middle class women and their idea of the feminine.

Ms. Venegas has published three monographs by the editorial house RM (Barcelona/Mexico), Maria Elvia de Hank (2010) a four year project which focuses on the life and surroundings of the late wife (1955-2012) of the eccentric millionaire and ex-major of Tijuana Jorge Hank Rohn, in which Venegas obtained access and managed to portray in a complex visual language, a class rarely seen in Mexican Photography. Venegas obtained the Magnum Expression award for the series.

The book Inedito (2012), was a 2006 Artist Commission by the Televisa Foundation, in which she follows the pop phenomenon created by the Mexican communications conglomerate Televisa, that was in part a soap opera and a pop band that stemmed from the story, toured the world, sold millions of albums and became one of the biggest hits the company has ever created.

Her third book Gestus (RM, 2015) for which she was recipient of the prestiged Sistema Nacional de Creadores grant (SNCA-FONCA, Mexico) to pursue a three-year project. Gestus is an investigation about portraiture in the middle class of Mexico City, where she found willing subjects via open calls and flyers and took pictures of photographers at work while doing a portrait. In 2015 she received the support of the Bancomer Foundation to publish the book.

In 2012 Museo de Arte Carrillo Gil in Mexico City, produced a solo exhibition and accompanying catalog titled Nunca sera mas Joven que este dia (You will never be younger than this day) which revised 15 years of her photographic production, focusing on 6 series of work linked by their relationship to portraiture, curated by Ruth Estevez and Alfonso Morales.

Since 2013 Venegas has been taking photographs for her series about San Pedro Garza Garcia (with the same title) and in 2015 she received the SNCA grant to continue its production. In this project she focuses on the municipality of Mexico that is considered to have the highest income per capita of the country, through its people, landscapes and ideology.

She received the Guggenheim Fellowship in 2016 for her project titled People of Possibility, which is a part of San Pedro Garza Garcia.

As the daughter of a wedding photographer, Yvonne Venegas’ work emerges from a reflection of portraiture charged by an analysis of social class and self-representation, particularly that of the Mexican upper middle class. She is interested in problematizing the idea of the perfect or official memory, by seeking moments of fragility or un-preparedness for the camera. Inhabited by upper middle-class social rituals, ideas of celebrity and beauty, upper class leisure, animals from a private zoo, beauty queens, or young wealthy children, she seeks to represent a fractured version of the images and situations that are traditionally understood to bring status and/or respect. Her experience growing up in the border has established in the way she views her subjects as well as the photographic practice itself, where she constantly looks for blurring lines between portraiture and documentary as well as explores the pulsating space between the perfect image and one that social studio photography could consider an error.

When producing work, Venegas believes in the relationship to the world via a camera as well as via her participation in situations over long periods of time. Anthropological curiosity and empathy are both essential elements of her practice. An important outcome for her work is printed and framed for gallery presentation, as well as in book form. She has published three books Maria Elvia de Hank (2010), Inedito (2012) and Gestus (2015), all by the editorial house RM.

Since 2009 Yvonne lives and works in Mexico City with her husband and two children.