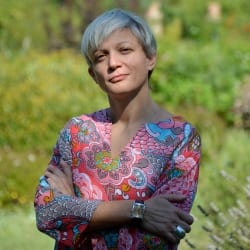 Growing up in a minor language (Croatian) in a communist regime of the former Yugoslavia, where nationalist (post-imperial, post-Ottoman and post-Habsburg) and universalist (communist internationalism) narratives were in conflict with each other, I was led to the study of the Middle Ages, a formative period both for European early modern and modern discourses and for the vernacular, later national, languages. Today, I teach medieval studies at UCLA in the departments of French & Francophone Studies and Comparative Literature.

My life-long intellectual project was definitively shaped by my experience as a wartime interpreter on the frontlines of the wars in the former Yugoslavia. As a theorist of translation, I have written about interpreting in conflicts (e.g. Critical Readings in Translation Studies, Routledge, 2010). As a medievalist, I have worked on issues of translation, representation, cultural production, and the relationship of historiography to history. My interests lie in exchange, mediation, and transmission; I have explored and analyzed linguistic predicaments, cultural differences, and power structures. My Guggenheim book project, “Medieval Fixers: Translation in the Mediterranean (1250-1500),” brings together these two parallel strands and strengths central to my scholarly work and I am grateful for the Foundation’s support.

In the past, I have reflected on radically different sets of epistemological and disciplinary questions: an exercise of connected history of a “Mediterranean Burgundy” via an integrated interdisciplinary analysis of social, political, and artistic forces that produced one of the finest works from the golden era of Flemish manuscript illumination, the Getty Museum’s copy of the 15th-century Burgundian Romance of Gillion de Trazegnies (The Adventures of Gillion de Trazegnies: Chivalry and Romance in the Medieval East, J. Paul Getty Publications, 2015, co-authored with Elizabeth Morrison); a cultural history attempting to bridge French medieval studies, postcolonial studies, and the history of sexuality by looking at the 19th-century medical writings on medieval sexuality (Pornographic Archaeology: Medicine, Medievalism, and the Invention of the French Nation, University of Pennsylvania Press, 2013); a literary and visual study of two fundamental concepts—genealogy and translatio—that shaped medieval society and its memory, and structured religious and lay epistemologies and hermeneutics (Bloodless Genealogies of the French Middle Ages: Translatio, Kinship, and Metaphor, UP of Florida, 2005). Follow this link for a more complete profile and list of publications.

Thanks to my collaboration with the Getty Museum, I have recently enjoyed engaging in public outreach via a Getty blog, and a Historical Serial on Tumblr.

My work has been supported by a Fulbright Research Scholarship in Paris (2012-2013) and a fellowship at the School of Social Sciences at the Institute for Advanced Study in Princeton (2005-2006).