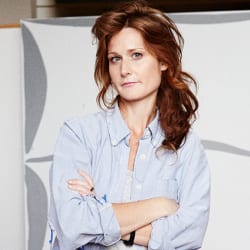 Amy Feldman’s work offers the viewer a vivid conversation between the physical and formal language of abstract painting. This is evidenced in the interactions she creates between the figure and ground, questioning the hierarchy of the two. Consistently working in just shades of grey, Feldman has developed an abstract sign system that alludes to systems of writing and the transmission of information: the viewer might be reminded of the monochrome of newsprint and calligraphy, or the grey scale of early TV. With this reduced palette, she aims to strip away associations and limitations that many colors would introduce to the painting. Similarly, the bulbous, and irregular forms that she paints are just familiar enough to be reminiscent yet – as with her color palette – elusive enough to dodge literal decoding. A clear allusion to the body and to Feldman’s position as female painter persists in the work.

Reviews and features of Feldman’s work have appeared in ArtForum, The New York Times, Art in America, BOMB Magazine, New York Magazine, Monopol, Mousse, The Brooklyn Rail, among others.

Feldman received a Joan Mitchell Foundation Grant and was also nominated for The Academy of Arts and Letters Award. The Dedalus Foundation awarded Feldman the Robert Motherwell Fellowship at The MacDowell Colony in Peterborough, New Hampshire. She received a New Jersey State Council on the Arts Grant and fellowships from VCUArts and the Fountainhead Foundation, Richmond, Virginia; The Henry Street Settlement at the Abrons Art Center, New York; Yaddo, Saratoga Springs, New York; Casa Wabi, Oaxaca, Mexico; The Marie Walsh Sharpe Foundation, Brooklyn, NY; and the Skowhegan School of Painting and Sculpture, Skowhegan, Maine. Feldman’s work is in the permanent collection of the Museum of Contemporary Art (MCA) in Chicago, IL and the Sheldon Museum of Art, Lincoln, NE.