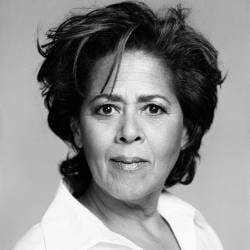 Anna Deavere Smith is said to have developed a new form of theater. Her series On the Road: A Search for American Character includes eighteen plays, the majority of which are dedicated to social change. For this work, President Obama presented Smith with the National Humanities Medal in 2012. Three years later, she was selected as the Jefferson Lecturer for the National Endowment for the Humanities—the highest honor for those working in the Humanities.

Two of her plays—Twilight: Los Angeles and Fires in the Mirror—deal with race relations in America and were created in the wakes of two major race riots. Her most recent work, Let Me Down Easy, dealt with the timely subject of health care. She is currently at work on a new project focused on at risk youth, who are vulnerable to the criminal justice system. She is the recipient of the McArthur Award, the Dorothy and Lillian Gish Prize, two Tony nominations, two Obies, and numerous other honors.

Smith is probably most recognizable in popular culture as Gloria Akalitus on Showtime’s hit series Nurse Jackie, or as Nancy McNally, national security advisor on The West Wing. Smith has been featured in several films, among them The American President, The Human Stain, Life Support, and Rachel Getting Married. She produced, wrote, and performed the film version of her Broadway play Twilight: Los Angeles, and her play Fires in the Mirror was also created as a film for PBS.

Smith is author of Talk to Me: Listening Between the Lines and Letters to a Young Artist (Random House). She has written for The New York Times, Newsweek, The New Yorker, O Magazine, Elle, Essence, and The Drama Review, as well as other publications. She has been invited to be and served as Artist in Residence in diverse environments: The Ford Foundation, MTV Networks, The Aspen Institute, and Grace Cathedral, San Francisco.

A nascent preacher, Smith has now delivered sermons at Grace Cathedral, San Francisco; Stanford University Memorial Church; and Trinity Church Wall Street. Smith holds several honorary degrees, including those from Yale University, The University of Pennsylvania, Juilliard, The Union Theological Seminary, Radcliffe, Northwestern, Barnard, Williams, The School of Visual Arts, and many others. She is University Professor at New York University’s Tisch School of the Arts and is affiliated with the School of Law.